My first review on the blog is going to be on Steve Umstead’s debut novel, Gabriel’s Redemption.  A Second Round Qualifier in the Amazon Breakthrough Novel Contest. 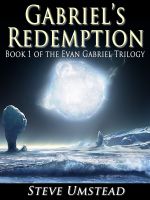 A brief snippet of the plot:

“Book One of the Evan Gabriel Trilogy

Can a disgraced Special Forces soldier find redemption, and will redemption cost him more than just his own life?

North American Federation Navy Commander Evan Gabriel was dishonorably discharged after losing his covert team on a far off world called Eden. Now, he’s being offered an opportunity to command a new team, on a new world, with a new mission, but the true motives behind the mission are unclear.”

GR hits the ground running right from chapter one.  Quickly giving you glimpses into Commander Evan Gabriel’s past; good times and bad.  Steve doesn’t pull any punches and gets straight to the story, doing a fantastic job of introducing the book’s characters as the plot unravels.  You quickly get to know Gabriel and his new squad of Special Forces as they launch into their journey to a cold and brutal ice planet known as Poliahu.  Gabriel and his team are dispatched to infiltrate a small corporate styled colony on Poliahu that is allegedly creating a powerful drug, known as Dew.  Dew is a highly addictive stimulant that is extracted from the bodies of Poliahu’s natives.

There are really no moments in the book that had me lose interest (and that’s saying a lot, as I am easily distracted).  The book did a great job to keep me in the boots of Commander Gabriel, or one of the many other excellent characters in the story.  Steve also wonderfully paints vivid pictures of the environments.  Whether it be a military barracks, a posh office in South America, the crew quarters of a space ship or the barely hospitable environment of Poliahu, I always had a clear picture of the character’s surroundings.

The inventions and usage of the various sci-fi technologies are perfectly executed.  From the Neuretics to the flexscreens, all the way down to the unbreakable crystal; Steve has masterfully thought out the world he’s created down to the last detail.  Sometimes, being bogged down with details like this can be cumbersome as you go through a book.  Have no fear though, GR handles this situation very well!  In some cases, Steve will explain in a simple and straight forward manner how a particular gadget functions.  However, most of the time the devices are shown to you as the said gadget is operating.  You understand quickly what he means by the term ‘Passive Scan’ versus ‘Active Scan’, and this applies for everything in the story, from the weapons to the ships.  Since this nail was hit on the head so effectively, the details do not slow down the progression of the story at all.

To summarize:  From start to finish Gabriel’s Redemption is a good, solid read.  A story with excitement, twists, and great pacing.  Believable characters that you come to love, and sci-fi elements that rival some of the greats.  Oh yeah, and lots of cool guns and other military tech that filled me with glee!

As an aspiring author myself, reading Gabriel’s Redemption has opened a new door for me into the sci-fi world.  Though I’ve always loved sci-fi, I’ve felt the task of writing a sci-fi novel would be too daunting; to create a totally new universe for my book.  After reading this outstanding novel, I plan to take that plunge into the science fiction world.  If I achieve even a fraction of the excellence, I’ll be very pleased.

If I had to pin a “Needs Improvement” on GR it would only be on it’s length.  It’s a healthy 65,000 words, which is nothing to shake a stick at, but with a story and presentation as captivating as Gabriel’s Redemption, I wasn’t quite read to see the last chapter come to a close.

One last thought – the editing quality in this book is quite high compared to other indie books I’ve read as of late.  Usually my eyes get stuck on small grammatical errors, or typos as I read them.  Those were few and far between in GR.

So what surprises are in store for Commander Gabriel and his special forces team?  Will Gabriel prevail in his black op type mission?  Be sure to pick up the book and find out!  One of the best ways to spend $2.99!

Gabriel’s Redemption on Barnes and Noble

I am a professional game developer during the day, but at night, my true passion comes to life when I read and write books.
View all posts by AJ Powers →
This entry was posted in Reviews. Bookmark the permalink.